Flying with the Owls 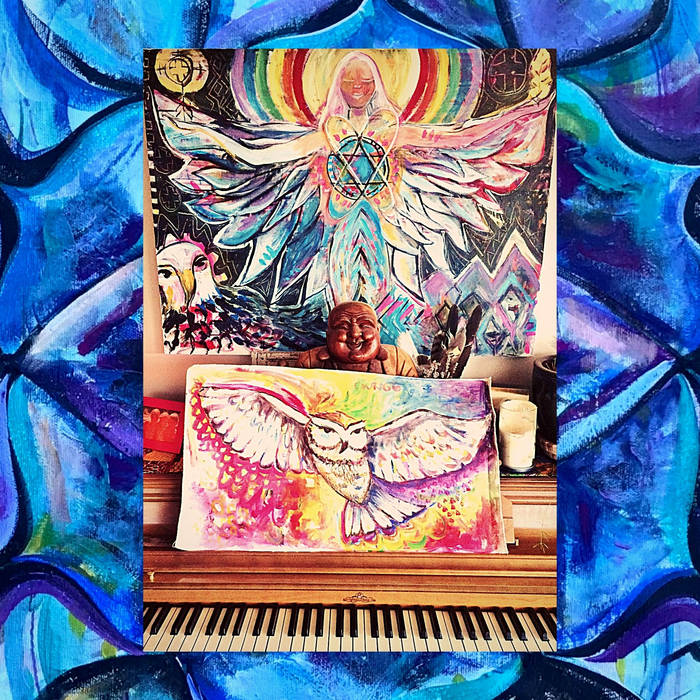 The picture in the center of the artwork tells the story of this song's emergence: the upright piano in the home of artist Whitney Freya, and the personal art shrine she has assembled around it, supported in the background by an enlarged portion of one her unique mandalas. I was visiting Whitney and performing in her hometown of Joseph, Oregon when the corona virus plandemic officially began in March 2020. We then spent three weeks together enjoying the bliss of the emergent spring, with no need to go anywhere at all, as the snow from Sacajewea peak melted down the alpine slopes, filling the lower valleys with fresh roaring waters.

Whitney became my muse during this period of time, and I witnessed her incredible and natural propensity for balancing parenting, art-making, cooking, gardening, in addition to her continual commitment to meeting folks online to guide them through her transformative spirituality in creativity courses. Amidst all this, she remains fully available to the spontaneity of the moment and the opportunity for the experience and expression of joy and exploration. And so, one day, she and I and her middle daughter Riley decided to drive out to a still snow-covered plateau for a picnic and views of the Imnaha river wilderness. Feeling a little too carefree, we got our truck stuck deep in the snow way beyond any signs of civilization...and thus transpired a whole night-long adventure!

Whitney's bright and quirky piano art shrine became my musical inspiration during this time, and as I daily improvised through countless themes and ideas, the playful harmonic progression featured in this song began to take over. While being played by it, I visually meditated on the artworks resting above the piano directly before me, and thus the song emerged . . . the eye of the eagle, prayer of the angel, smile of the buddha and the flight of the owl gradually played out as a progressive state of mind i was experiencing within my self at the time. Whitney's chief muse through the years of her spiritual and creative awakening has been the owl. This song is about the happy liberty of seeing love, seeking guidance, laughing in the joy of it all, and flying into our wild destiny.

Thank you Freya. Enkosi river Imnaha. Blessings upon the Eagle Cap wilderness. Respect to Chief Joseph and the Wallowa band of the Nez Perce.

I've been waiting to look into your eagle eyes
I've been praying with my heart open wide
Now I'm smiling with a gleaming bright eye
Soon we're flying with the owls of the night
...through the eagle cap skies...

Joel Karabo Elliott (jKe) is an Amer-Afrikan composer, musical healer and steward of the global ensemble Roots Grown Deep. Joel's instrumental versatility and unique blend of guitar, voice, winds, piano and percussion gives his music the feeling of a focused wandering between the American and African continents. ... more

Bandcamp Daily  your guide to the world of Bandcamp